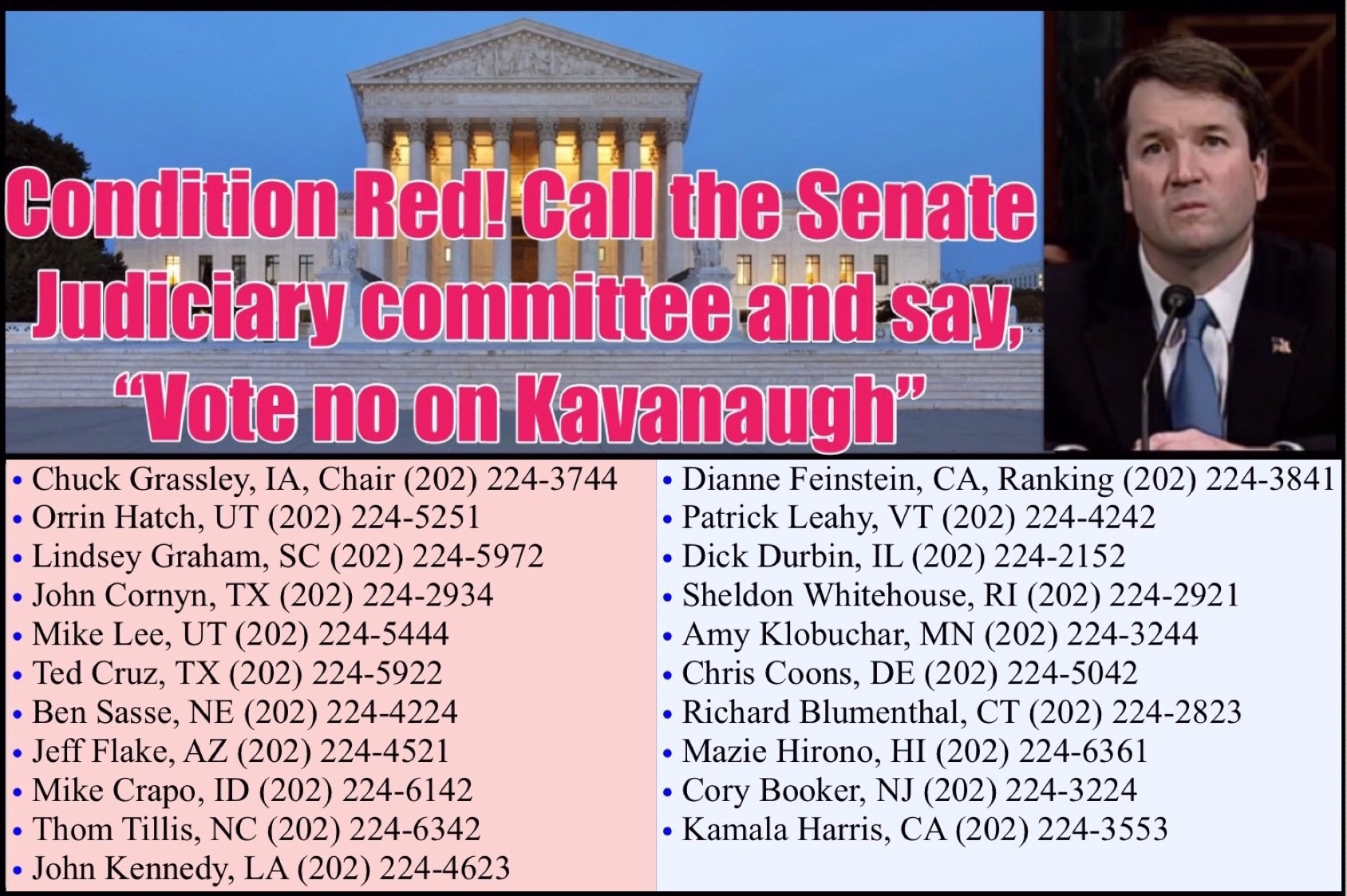 Progressive Democrats of America (PDA) strongly opposes the confirmation of extremist Brett Kavanaugh. A responsible and impartial U.S. Supreme Court is the cornerstone of our democracy, and a fateful decision is being made right now in the halls of Congress. We must demand a thorough and impartial investigation of Brett Kavanaugh BEFORE any vote takes place.

Brett Kavanaugh is unfit to be on the U.S. Supreme Court on so many levels. His extreme positions on torture, presidential power, women’s rights, immigration, environmental regulation, net neutrality, LGBTQ rights, and health care—just to name a few policy areas—are radically outside the mainstream.

The White House and Republicans on the Senate Judiciary Committee will stop at nothing to get Kavanaugh confirmed before the midterm election. They have refused to divulge 90 percent of the documents relevant to his work record, especially pertaining to his part in Bush-era justifications of torture on detainees. They have ignored his acts of lying and obfuscation to Congress in this and past confirmation hearings.

Kavanaugh’s positions are far outside the mainstream of American jurisprudence. Despite his gleeful participation in the Ken Starr inquisition against President Clinton, Kavanaugh now insists that Presidents must not be investigated, and therefore that Trump should be above the law. Additionally, last year moderate Senators Patrick Leahy and Dick Durbin accused Kavanaugh of “misleading” the Senate Judiciary Committee during his nomination hearings, calling into question the character of the nominee.

The White House and Republicans on the Senate Judiciary Committee will stop at nothing to get Kavanaugh confirmed as quickly as possible. This even though Dr. Christine Blasey Ford has credibly accused him of sexual assault when she was an underage girl. Deborah Ramirez has credibly accused him of indecent exposure while they were both attending Yale University. Other allegations of sexual misconduct are surfacing.

Why won’t the Senate Judiciary Committee thoroughly investigate these multiple allegations of sexual assault and harassment? Instead, the Senate Judiciary Committee is planning to vote as soon as this Friday, without any independent investigation or examination of corroborating witnesses. Worse, Senate Majority Leader Mitch McConnell declared on the Senate floor that he plans to stubbornly hold a full vote on Kavanaugh’s nomination this coming Monday—before any public hearing on allegations of sexual assault. Help us make sure that this vote fails!

Call the Senate Judiciary Committee members. Call your own Senators. Call Senators Collins (R-ME), Murkowski (R-AK), Heitkamp (D-ND), Donnelly (D-IN), Jones (D-AL), and Manchin (D-WV). Demand a thorough and impartial investigation of these credible allegations of sexual assault and misconduct BEFORE any committee or full vote takes place. Without a thorough and impartial investigation of these allegations, they must vote NO on Brett Kavanaugh.

We’ll keep seeing these abuses of authority as long as extreme right wing Republicans dominate our political system. Help empower a deep blue progressive wave. Contribute whatever you can afford now, and help us build the powerful, popular progressive movement we need. Make your “dollars holler” for progress by signing up to make automatic monthly donations. Then, sign up to make easy, effective get out the vote (GOTV) calls. Mike “Phone Guy” Fox will help you make a huge difference during the primaries currently underway and on into victories in the November elections. Please Give Now To Support Progress!