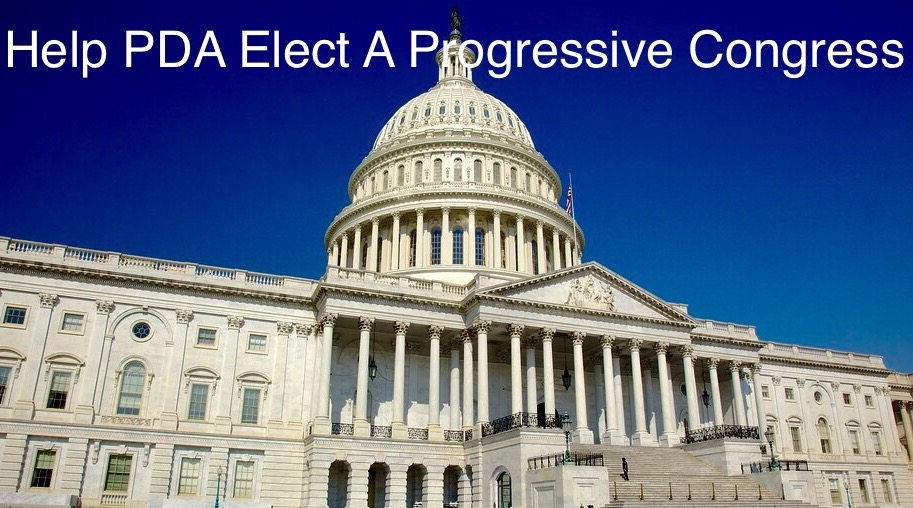 We won’t sugar coat the results in Florida—our endorsees fell short. Of course it’s much better to win, but a well-fought campaign can often lead to future successes. In the Sarasota area, Jan Schneider ran one such movement building campaign, and she expressed real gratitude for your support, writing:

Thank you and PDA for all your help.  We managed to keep the margin in single digits despite:  (a) being outspent 54 to 1; (b) fighting the corporate Democratic Party (in particular Steny Hoyer, Debbie Wasserman Shultz and Nancy Pelosi soliciting for my opponent); and (c) local party control.

Let me know how to help you help other PDA candidates for the general.  They said a progressive would have no appeal to Democrats here.  Still, while Gwen Graham polled 58%. we did well against "Republican lite,"  Thanks again, I really want to help PDA,

Florida has proved that this is no ordinary campaign. We have a true progressive on the ballot, the first black major party nominee for governor in state history, and he is counting on our support. That is why Senator Bernie Sanders, local groups, and Gillum's grassroots army got out the vote to put him over the top in this primary.

When Florida voters went to the polls tonight in record numbers, they didn't just vote for Andrew Gillum, they voted for Medicare for All, a $15 minimum wage, public education, criminal justice reform, the environment, and making Florida a state where everyone thrives. They voted for a political revolution—our revolution.

[A] stunning upset victory in Florida's Democratic governor's race stole the show. Democrats chose the most progressive candidate—and the only one who wasn't wealthy—in Tallahassee Mayor Andrew Gillum. Florida's first African-American major-party nominee for governor, Gillum will face Republican Rep. Ron DeSantis, who has the backing of President Donald Trump.

Their race will pit a Republican who is known for praising Trump on Fox News against a Democrat who says he wants single-payer health care and Trump impeached just as the 2020 presidential race gets underway. Florida is a major presidential battleground state....

Trumpublican ideologue DeSantis actually claimed a vote for Gillum would “monkey this up,” a very curious choice of words to use to bash his exceptionally accomplished African American rival. We have confidence that Florida will reject this kind of dog-whistle gutter politics and embrace the 21st century.

Arizona is also poised to make progress on the Gubernatorial level with Democratic nominee, Former Arizona Department of Education official and professor David Garcia. While PDA as a federal political action co-op can not endorse on the state level, our alliance partners like People Demanding Action and Our Revolution can back exciting candidates for Governor like David Garcia and Andrew Gillum, as well as Ben Jealous in Maryland and Stacey Abrams in Georgia.

Join the PDA Phone Team making easy, effective calls from your own home with Mike “Phone Guy” Fox. We need your help now to help elect strong progressives to Congress.

P.S. We don’t ask for dues. We rely on small donations from people like you. If you've donated before, now is the time to sign up to make automatic monthly “sustainer” contributions. If you're already a sustainer, we appreciate your help! If you can, please consider increasing your donation by giving another amount per month.

No spare change to help us make change? Then join the PDA Phone Team making easy, effective calls from your own home with Mike “Phone Guy” Fox. We're here to help you make progress in your state and locality! If you need help organizing a new PDA chapter or energizing your existing chapter, please contact PDA Field Coordinator Dan O’Neal.