It's "Fab Five" Eve and PDA is All Over This Land

Tomorrow is Election Day in the “Fab Five” states of Florida, North Carolina, Ohio, Illinois, and Missouri. All of these states have grown much closer than even our most optimistic hopes a few days ago, and three are virtual ties according to the most recent polls. Please take this as a reminder to bring your Bernie-supporting friends and neighbors out to vote.

In Ohio, Clinton clings to an incredibly shrinking lead: 46% to 41%. In her home state of Illinois, Clinton's once-massive lead has nearly disappeared: 48% to 45%. In Missouri, Bernie actually leads by a single point: 47% to 46%. After Clinton blew massive leads in Iowa, New Hampshire and most recently in Michigan, almost no margin is too large for us to overcome! Candidates need to win delegates, so a close loss is much better than a blow out. Each and every vote matters! Remind your pro-Bernie friends and relatives in these states to vote tomorrow! 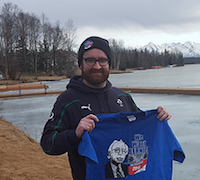 Only PDA has national and state leadership organizing for Bernie from Alaska, Washington State, and Idaho to Arizona, New Mexico, and Florida while also focusing on Ohio and Illinois this week! Please kick in $5 or whatever you can afford to help keep us going! Please donate $5 or more now to help PDA elect Bernie and the team of progressives we need to build the political revolution!

Later this month, six more states will go to the polls to vote for either Bernie Sanders or Hillary Clinton, and PDA is already organizing in that promising region. Arizona, Idaho, and Utah will vote on the 22nd; Alaska, Hawaii, and Washington State will vote on the 26th. Five of these six Western states—all but Arizona—are caucus states. Bernie hopes to do well in all of them. That's why PDA decided to organize out west this month, while the Sanders campaign was necessarily focused on earlier states like Michigan, Ohio, and Illinois. See photos online here. 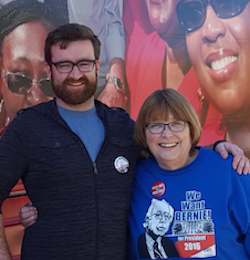 We've had incredible activity in nearly every primary and caucus so far! Special mention goes to Mike Fox, PDA's phone guy, who makes sure the Get Out The Vote (GOTV) calls roll out in massive numbers just when they're needed most. Contact Mike to get involved! Whether you've made calls before or never have, Mike "Phone Guy" Fox will help you make a difference in the upcoming primary and caucus states making important Get Out The Vote calls from your own home.

PDA's former Executive Director Conor Boylan and I rode the National Nurses United (NNU) Bernie Bus from Phoenix to Tucson in Arizona, and then over to Albuquerque, New Mexico. We joined the NNU nurses at exciting events along the way, energizing college campuses, and meeting incredible PDA supporters. It was great to reconnect with Dan O'Neal—our amazing Arizona State Coordinator—and with “dynamic duo” Paul and Laura Stokes who coordinate PDA New Mexico team. They have done such a wonderful job since the very beginning—as have so many of you! 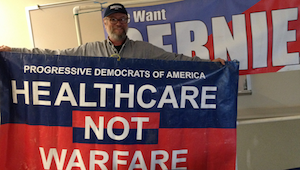 On Sunday, March 6th, PDA Washington State Coordinator Walt Kloefkorn pulled together a Sunday afternoon meeting in Spokane, WA, featuring PDA Political Director Steve Cobble. As usual, Walt had the best array of signs! The next night, Shelly Lenhart of Boise, ID, pulled together a meeting with Steve at which they discussed the Idaho caucus. On Tuesday, March 8th, Steve flew up to Alaska, joining Conor to hold We Want Bernie visibility in and around Anchorage (including Wasilla, from which Conor tried to spot Russia). As always, Mike Fox and the PDA phone team supported all these efforts!

I am headed to Hawaii for a PDA event with rising star Congresswoman Tulsi Gabbard. There we will encourage a "yuuuge" Bernie turnout for Hawaii's key caucus! Just since January, I have been in Iowa, Washington, Arizona, California, Colorado, Washington, DC, New Mexico, and a couple other states along the way.

In short, since we first staked out the Bernie Sanders turf way before anyone else, PDAers have been an advancing wave. We keep acting independently, building support for Bernie in states ahead of the official campaign, and adding value every step of the way. We can only keep ahead of the curve because of your support. Please pitch in $5 or whatever you can afford now to keep us working to build the political revolution Bernie is calling for.

Thank you to Steve, Conor, Mike Fox, our incredible chapter leaders and PDA friends throughout this country. Your work matters. Your effort matters. Your donations matter. Building PDA and the progressive movements matters.

P.S. If you’re on social media, please click on these “Fab Five” links now to add your voice to the Bernie Get Out The Vote effort!

Your support is more important now than ever! PDA was the first national organization to back Bernie Sanders for President. Donate $5 or more now to help PDA elect Bernie and other progressives! You can also donate to receive exclusive PDA Bernie Gear!