New York Results and the Work Goes On!

Today, New York State voted. Unfortunately, arcane eligibility rules and rampant irregularities marred this primary, called tonight for Clinton. These factors apparently stacked the deck, creating grave concerns. Disenfranchised Democrats filed lawsuits earlier this week, and we will keep a close eye on those proceedings. Tonight's troubled results only confirm that a substantial number of Democrats—as well as countless independents and others—reject the status quo. That is good news, no matter how the votes came out tonight.

Keep On Keeping On Building the Political Revolution
Tune in to Our Progressive Round Table Tomorrow! 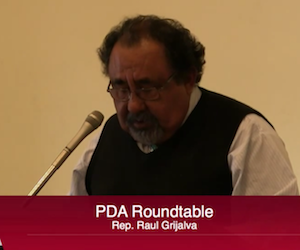 Our movement is growing! Bernie Sanders and Progressive Democrats of America remain committed to building the political revolution! We're engaged, encouraged, and energized. We are eager to take this campaign all the way to the convention and beyond!

Please pitch in $5 or whatever you can afford now to help keep PDA organizing for you! Money tight? You can still help! Contact Mike "Phone Guy" Fox to make critically important Get Out The Vote calls from your own home!

Watch our Progressive Round Table with members of Congress, staffers, activists, and organizers live tomorrow April 20, 2016 2:30 PM (ET) 11:30 AM (PT) or on demand here. You can also see previous Round Table meetings here.

The work goes on, and will continue until we've built the progressive governing majority we need to stand up to the billionaires, the big banks, and other plutocrats who've dominated our economics and tainted our politics—as we've sadly seen in New York today.

This week. we're also delivering letters to hundreds of Congressional offices all across the country, supporting a resolution we helped author to address the climate emergency, and other critically important issues.

Don't forget to vote for Bernie and other progressives in Maryland (early voting is going on tomorrow and Thursday), Pennsylvania, Connecticut, Delaware, and Rhode Island on April 26th! Not in any of those states? Then join our PDA Phone Team to make important Get Out The Vote calls.

PDA has had our feet on the ground working for Bernie! We need your support now more than ever. Please give whatever you can afford now.

Since 2013, PDA has been working to elect Bernie Sanders. We have:

We've also made a lot of friends along the way. One of them, talented artist Eric Sokoloff, created a beautiful portrait of Bernie Sanders. Now, he is offering a limited run of 99 numbered first edition high-quality prints, suitable for framing.

One of these prints will be yours as our thank you for a donation of $99 or more—signifying our struggle for the 99%. Hurry! Get your print while they last!

Besides helping Bernie in the remaining primary and caucus states—and all the way to the Democratic nomination—your donation will also help support PDA's regular organizing, and our other ambitious efforts.

We're co-sponsoring the People’s Summit, (Chicago, June 17-19) and hosting Progressive Central coinciding with the Democratic National Convention, (Philadelphia, July 25-27). Please save these dates and plan to join us!

We're also mobilizing to elect progressives to Congress. Will you pitch in $5 or whatever you can afford now to support PDA's vital work this summer?

We will not let anything stop our drive to reform our politics and economics. We will participate with allies to investigate and remedy reports of wholesale voter disenfranchisement as Common Dreams reports, "Voting Problems Plague High-Stakes Primary Day in New York."

Onward! Join our PDA Phone Team to make important Get Out The Vote calls. Too busy to volunteer? Contribute now!