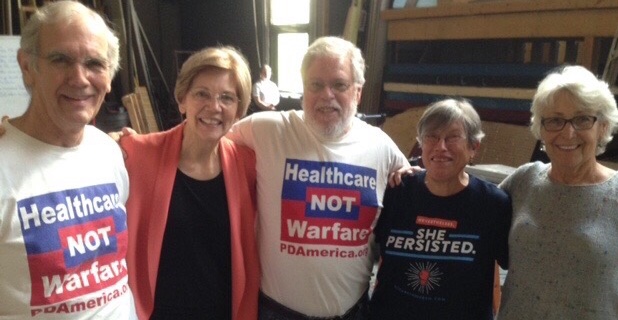 The Unity Resolution, which passed at the end of the convention on Saturday, was brought before the convention after members of the Progressive Democrats of America (PDA) with consultation from Our Revolution gathered the necessary signatures to have the resolution considered.

State Senator Jamie Eldridge, a 2016 Bernie Sanders delegate and member of the Democratic State Committee, supported the resolution on the floor of the convention. “I’m very happy that the Unity Resolution was approved by delegates today, and am grateful for Mass Democratic Party Chairman Gus Bickford for bringing the resolution up for a vote,” said Senator Eldridge.

The 2016 Democratic presidential nomination process showed the need for improvements, and I’m pleased that the Unity Reform Commission, endorsed by both DNC Chair Tom Perez and DNC Deputy Chair Keith Ellison, received support from delegates, to open up the process for how voters decide who the Democratic nominee for President will be.”

Larry Cohen, Board Chair of Our Revolution, said, “Massachusetts is leading the way in support of Democratic Party change and democracy inside our party as well as outside. Voting rights are just as important when we pick candidates and build our party structure and leadership as in a general election.”

First, the manner of voting during the presidential nominating process and increasing participation and inclusion in the primary process.

Third, revising and reducing the role that unpledged delegates play in the process.

Finally, increasing the focus on making the Democratic Party and Democratic candidates competitive in every region, by broadening the Party’s base, empowering Democrats at the grassroots level, and expanding the Party’s donor base.