...And Unpresidential: Trump Is A Clear And Present Danger To America

Progressive Democrats of America (PDA) understands that it’s not enough to merely resist Trump and his Trumpublican enablers. We must organize and mobilize to contain the damage including by electing progressives to Congress in November—but even that isn’t enough. It’s impossible to keep up with all of the corruption, incompetence, and wrongdoing by the Trumpublican Syndicate. Just this past week, Trump disgraced our nation by kowtowing to Putin and flippantly rewriting our foreign policy on the fly.

Somehow despite his obsequiousness to Putin, Trump rejected Russian overtures to denuclearize our planet. He is uninformed, erratic, impulsive, and inept. To protect us from any number of looming catastrophes, the Congress must restrain Trump. Use our action alerts below to demand that Congress act now, before the next crisis, crime, or calamity! Tell Congress: Don’t Let Trump Fire Mueller. Also, Tell Congress To Investigate And Impeach Trump. 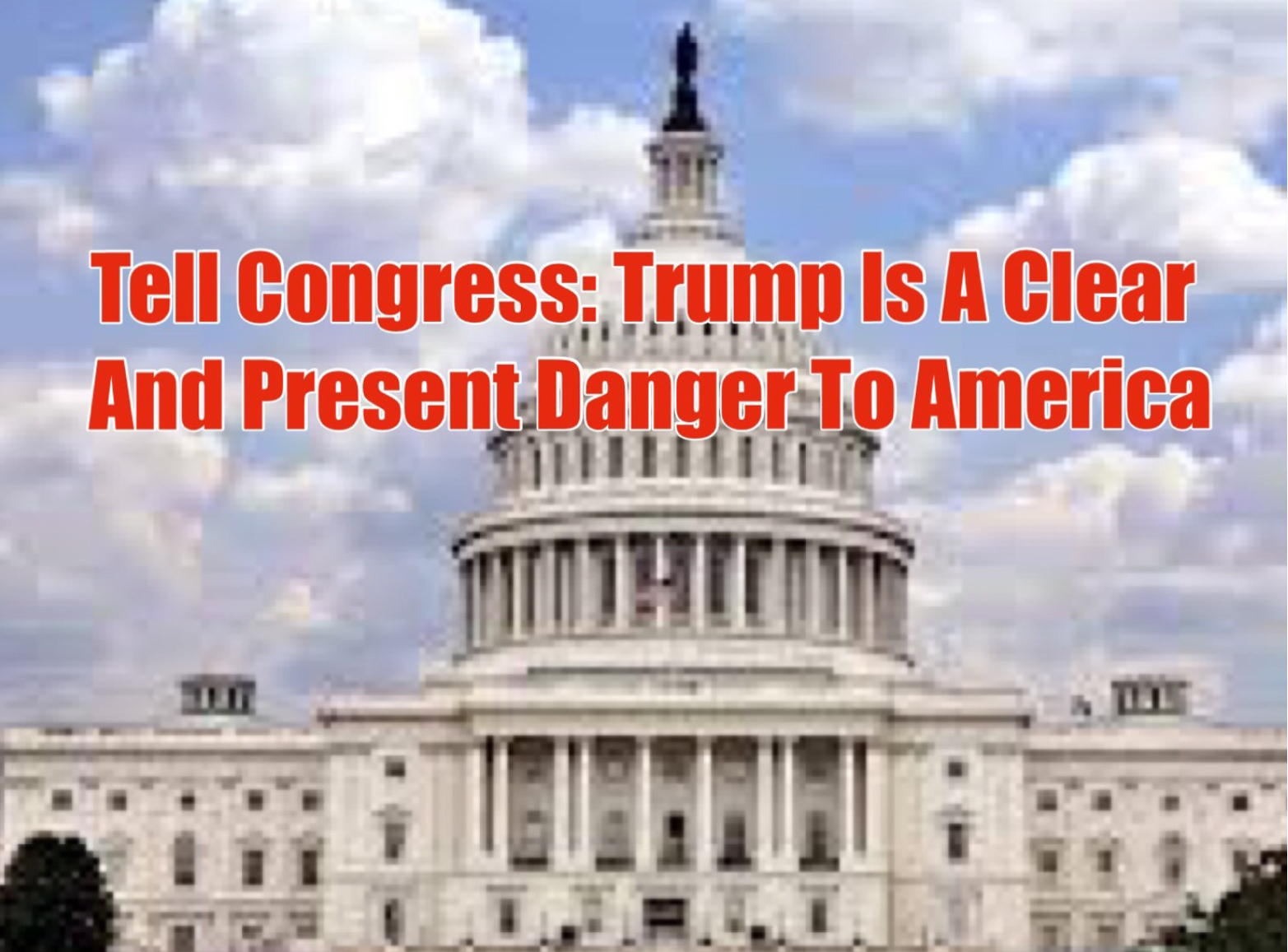 Give to Support Our Mobilization

Please click on the links below to demand Congressional action!

Here are just some of the egregious violations of law, public trust, and / or common sense and decency:

Overturning Net Neutrality, DACA, and Iran nuclear deal, as well as lambasting our allies—all apparently on either a petulant whim or else from some obsessive vendetta against President Obama, or possibly both.

Outsourcing our policy—foreign and domestic—to multinational corporations, and foreign interests including scheming to subvert our election and bartering favors for Trump family businesses in exchange for concessions at America’s expense—in violation of the U.S. Constitution.

Directing Republican Congress members—led by Rep. Devin Nunez—top administration officials, and spokespeople like Rudolph Giuliani and to attack the media and investigators, stonewall fact finding efforts, and obstruct Special Counsel Robert Mueller’s probe into wrongdoing by Trump and his campaign.

As The Hill reported, “Attacks on Mueller, Korean summit failure darken GOP midterm prospects,” (May 25, 2018): “Trump appears to believe that escalating his attacks against Mueller, similar to his attacks against Hillary Clinton, would mobilize the GOP base to vote in November. He seemed to believe that talk about his potentially receiving the Nobel Peace Prize would lift his standing with voters.”

The Hill warned that the “The problem with the GOP attacks against Mueller, the frantic and and aggressive support for these attacks from a pro-Trump faction of House GOP Republicans and the acceptance of these attacks from House Republican leaders, further locks the midterm fate of Republicans to events in the Russia investigations.”

But this isn’t about politics. It’s about the bedrock foundation of the United States of America. Trump has been hammering away at that foundation at least since he led risible and racist “birther” conspiracy theory attacks against President Obama’s legitimacy.

His appetite for demolition has only increased since a fluke in the Electoral College thrust him into power as he:

Appointed climate denier and friend to polluters Scott Pruitt to run the Environmental Protection Agency, someone who not only perverted the mission of the EPA but also plundered taxpayers’ money for his personal enrichment—until he was forced to resign.

Appointed public education enemy Betsy DeVos to run the Department of Education despite her financial ties to private education and other conflicts of interest including those that led her to undermine public schools and roll back standards to protect women on college campuses.

Appointed extremist Robert Gorsuch to the U.S. Supreme Court, and demanded the Senate tear up rules written by Thomas Jefferson to ram through his confirmation on a party line vote.

Empaneled the Kobach Committee to disenfranchise voters and invade our privacy. As The Washington Post reported “Kris Kobach is the real fraud” (September 14, 2017) who sought to throw millions of voters off the registration lists. This attempt to sabotage democracy failed...for now.

This has gone far beyond alarming and well into intolerable. Every day it gets worse as the list of outrages and atrocities grows.

The New York Times reported: “President Trump’s lawyer Michael Cohen met a Russian oligarch at Trump Tower, then got a $1 million contract from a firm tied to the oligarch” (May 25, 2018):

“Eleven days before the presidential inauguration last year, a billionaire Russian businessman with ties to the Kremlin visited Trump Tower in Manhattan to meet with Donald J. Trump’s personal lawyer and fixer, Michael D. Cohen, according to video footage and another person who attended the meeting.”

The authors of the Constitution envisioned high crimes and misdemeanors by presidents, and they provided the remedy: Impeachment. We don’t expect the servile Republican House majority to perform their duty. We must demand they do so anyway. That’s all we can expect, for now.

We must also donate whatever we can afford and work hard to elect people to Congress who will take their oath of office seriously. Help us build a progressive blue wave. Contribute to our Win 2018 Action Fund. Sign up to make important, easy, effective get out the vote (GOTV) calls. Mike “Phone Guy” Fox will help you make a huge difference during the primaries and on Election Day.

Please take as many actions above as you can, then share them with all your contacts by email and social media. Please click here to generously support our work by check or card. Money short? Then please support our work with your time and effort. Make easy. effective calls from your own home to help elect candidates, and make progress. Mike “Phone Guy” Fox will show you how.

P.S. We're here to help you make progress in your state and locality! If you need help organizing a new PDA chapter or energizing your existing chapter, please contact PDA Field Coordinator Dan O’Neal. Join the PDA Phone Team making easy, effective calls from your own home with Mike “Phone Guy” Fox. No time to volunteer? Then please pitch in $1000, $100, or whatever you can afford. We don't have billionaire dark money donors. We depend upon your generous support. Please give generously to support our organizing.