Will Bernie's Revolution Continue? It's Up To You

Our movement requires mass mobilization like Progressive Democrats of America is known for—not just online activity. We need your help now. Please contribute $5 or whatever you can now to keep us organizing and mobilizing! We are on the ground on the district level helping to elect progressives to Congress with real, PDA-style, grassroots activism. As Bernie often says, with a bottom-up—not a top-down—movement!

If You Haven't Yet, Please Pitch In Now! 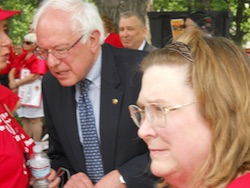 PDA launched the We Want Bernie campaign in 2013. Since then, we've welcomed larger, better known, organizations to help the effort with their large email lists and large paid staffs. We don't begrudge their efforts. We honor the work everyone has done.

While we’re pleased to have newcomers join in, PDA is different. Unlike many other organizations, PDA isn't a virtual web-based email operation. We’ve been on the ground, on the phones, and working the polls in more primary and caucus states than other bigger organizations.

Also, we were there much earlier, working to build this movement back when Bernie was in single digits in the polls. PDA has led the way, from 2015 to last fall when Bernie first started to soar, to today as Bernie is building a transformative political revolution—thanks to all of us.

While other groups are raising huge amounts for their own organizations, PDA has been operating on a modest budget. Now it’s time for all of us to step up YUGE to make a real difference in this political revolution. Show your support with exclusive PDA Bernie swag including Union-made buttons, bumper stickers, rally signs and more!

If you step up now, PDA's role in getting Bernie to run in the first place will be respected. We hope to see you at the Chicago People's Summit. We urge you to be as generous as possible when you register, because your payment will help PDA bring more of our organizers to join us. Visit the page regularly for frequent updates! See the article here for some of the advanced buzz!

If you don’t step up to help now, better-funded organizations will claim credit for the movement and neglect the issues you hold dear. We all know how revisionist history works. Enough said there.

Please, dig deep. Ask friends and colleagues to join with you giving generously. This is a critical moment. All the work we have done together hangs in the balance. Pitch in whatever you can afford now!

Like Bernie, PDA depends on small donations from progressives like you. Our revolution will either be continued and expanded, or else it may be undermined and diverted. The choice is yours.

None of this would've happened without all of us working together. We aren't giving up and neither should you. Although the media won't tell you this, Bernie's campaign is going strong.

Talented artist Eric Sokoloff is offering a limited run of 99 numbered high-quality prints, suitable for framing. One will be yours as our thank you for a donation of $99 or more, signifying our struggle for the 99%!

If $99 is too steep, PDA is offering deep discounts on quantity purchases of Union-made We Want Bernie buttons, bumper stickers, rally signs, and more! Visit our ActBlue page to get yours while they last!