Your Vote Is At Risk!

Since our launch in 2004, Progressive Democrats of America has remained focused on election integrity and opposing voter suppression of every kind, something the media have too long ignored. In early 2005, we worked with our founding National Advisory Board member, Rep. John Conyers, and other activists to uncover the widespread failures in the Ohio 2004 voting process.

What we found then was frightening, and the alarming flaws plaguing our elections are still widespread. The legitimacy of our republic is threatened with every suppressive tactic and computer “glitch”, but PDA’s Voter Access Protection and Election Integrity Issue Team is on the case. Please support PDA's ongoing election reform efforts now.

Let Me Vote, and Count My Vote Accurately 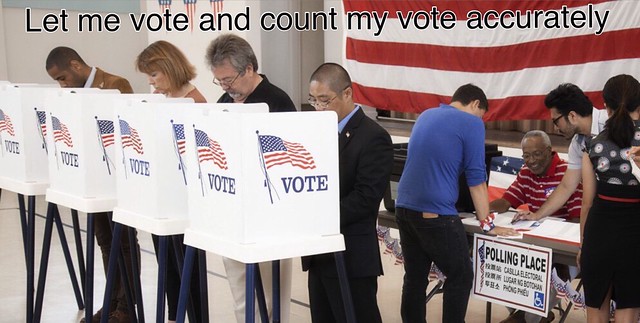 We're working to restore democracy, protect voting rights, get money out of politics, ban easily hackable electronic voting machines, increase the public’s right to know every aspect of our elections—including public verification of the vote count, and supporting public funding of elections.

We’ve brought together activists from many states to reduce fraud in voting systems, to shine the light on voter suppression, and to demand accountability and needed reform. As PDA Advisory Board Chair and PDA Executive Director, we've worked with People Demanding Action Executive Director Andrea Miller and other nationally-recognized leaders address these threats to our democracy’s survival.

Unfortunately old threats persist and new threats keep coming. Our friend Greg Palast, the voting rights crimes investigator who uncovered Katherine Harris’ purge of 96,000 voters in Florida in 2000, has come out with a new documentary, “The Best Democracy Money Can Buy.” It nails the culprits, the usual suspects and then some!

Greg identified the GOP’s new and more nefarious vote purging technique: a way to match names within a multi-state database and strike 100,000 or even millions of legal voters from the rolls. “Interstate Crosscheck” is a diabolical racist scheme; and Greg's film shows why. It will mobilize you—go. For screenings near you or to request a showing near you, click here.

Meanwhile, please click here to sign the petition to stop Crosscheck. We can’t let this multi-state voting purge succeed. The petition calls on the U.S. Justice Department to act now to protect innocent people who are unaware their voting rights are under attack, by asking the Attorney General to halt this intentionally inaccurate, multi-state, racist, mass purge effort. Please tell the DoJ to act now before Crosscheck potentially tilts the presidential and congressional elections this November!

In the current Rolling Stone magazine, Greg writes: “A program to prevent alleged voter fraud, 'Interstate Crosscheck,' has wrongly targeted SEVEN MILLION NAMES—ONE IN SEVEN voters of color in the Crosscheck states....” He warns: “Tens of thousands of voters have already been purged in a single state. As many as one million may lose their right to vote by this November.”

Only you can keep us organizing to deter fraud this November. We need your help to mobilize citizen oversight. 2016 isn't the beginning or the end of suppression and other threats to the integrity of our elections system. Support our long term advocacy for better laws, systems, and practices in our elections.

P.S. We're here to help you make progress in your state and locality! If you need any help organizing a new PDA chapter or energizing your existing chapter, please contact PDA Field Coordinator Judy Hess.